(cointelegraph.com) - The milestone in Syndicate’s journey may indicate that DAO governanc...

(cointelegraph.com) - The milestone in Syndicate’s journey may indicate that DAO governance structure will become more common in blockchain and beyond.

Blockchain-based investing protocol Syndicate claims that 10% of all decentralized autonomous organizations (DAO) in existence have been created on its platform in less than three weeks of operation.

Syndicate is a DAO creation platform that has landed investments from A13Z and Coinbase Ventures, among others. The team revealed the development in a Feb. 15 tweet. 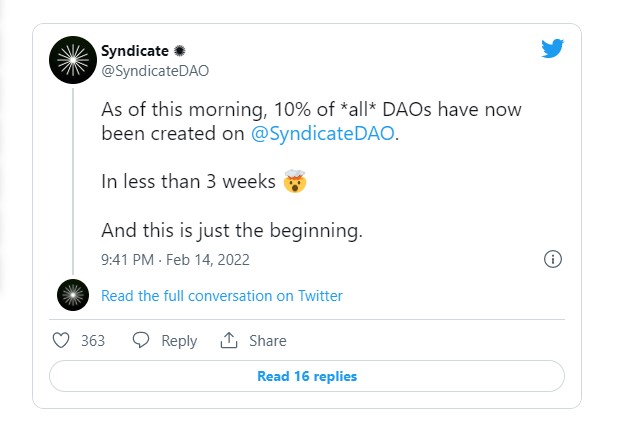 Will Papper, co-founder of Syndicate explained to Cointelegraph today that the project had created 450 investment clubs as DAOs, which is just a little bit over 10% of the “best estimates” of 4227 DAOs in existence, based on DeepDAO’s metrics and figures reported in Forbes.

DeepDAO is an analysis tool that tracks decentralized organizations.

The rapid influx of new organizations at Syndicate indicates that the DAO governance structure has gained popularity since their broad introduction to the crypto mainstream just a couple of years ago. Currently, the two top DAOs are BitDAO (BIT) and Uniswap (UNI).

Uniswap DAO was formed in 2020 and BitDAO in 2021. They now command a collective $4.4 billion in treasury funds.

The Republic of the Marshall Islands this week became the first sovereign nation to officially recognize DAOs as legal entities.

It automates the process on-chain, allowing anyone to set up an investing DAO in under a minute for just the cost of gas. DAOs can also plug in compliance tooling, to help keep everything in accordance with regulations.

Papper said that the team believes DAOs are “one of the most powerful structures for coordination that we’ve seen,” and that their utilization in governing businesses and clubs will become more common over time.

However, Papper said that there are trade-offs when an organization decides to utilize a decentralized method of coordinating efforts.

Fed Never Did It: US Senate Banking Head Lashes Out At Super Bowl Crypto Ads

“Anyone who runs a DAO knows that they are much less efficient than traditional companies or other organizations. This trade-off in efficiency is worth it, however, for the increase in resiliency.”

Although there are inherent benefits to coordinating under a DAO, Papper added there are still kinks to be worked out in their mechanics:

The Syndicate team did not provide a list of the organizations that had been created through the platform, stating, “We don't maintain information about our users as everything runs on decentralized smart contracts and to protect their privacy.”

However Papper said the information could be verified on-chain.