(Cointelegraph) - Every little bit of crypto donated can help Ukrainians, and it is clearly demo...

(Cointelegraph) - Every little bit of crypto donated can help Ukrainians, and it is clearly demonstrating that crypto is the future of financial donations.

The people of Ukraine require the world’s help more than ever before. As the conflict between Russia and Ukraine continues to rage on, the world must rally behind the Ukrainian government to bring back peace and stability to the Eastern European nation.

The crypto community has done just that with nonfungible token (NFT) companies, decentralized autonomous organizations (DAOs), and crypto users all over the world leading the effort to help aid Ukraine with donations of Bitcoin (BTC), Ether (ETH), Polkadot’s DOT and even NFTs.

It is impressive how fast the crypto community got behind the Ukrainian people. Two days after the Russian military entered Ukrainian territory, the Ukrainian government asked for crypto donations on Twitter, sharing Bitcoin and Ethereum wallet addresses.

Vice Prime Minister of Ukraine Mykhailo Fedorov confirmed on his Twitter account that the call for donations was real and asked people to stand with the nation.

In fact, Ukraine ranks fourth on the Global Crypto Adoption Index, compiled by data firm Chainalysis, which estimates that roughly $8 billion worth of cryptocurrency enters and exits the country annually.

According to the New York Times, the daily volume of cryptocurrency transactions stands at around $150 million, exceeding the volume of interbank exchanges in the hryvnia. 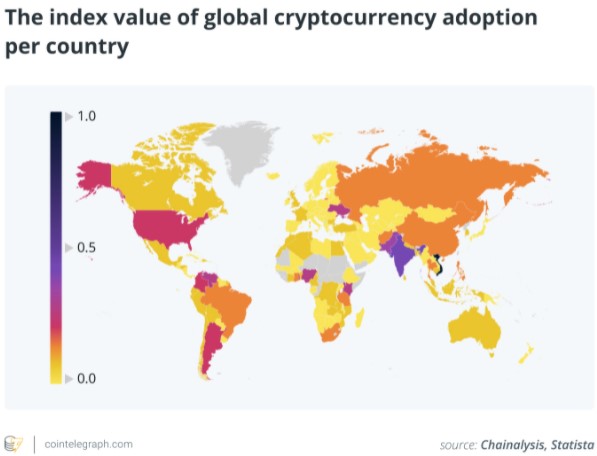 And just recently, Ukraine’s government announced that it had received a total of “close to $100 million” in crypto donations, according to Alex Bornyakov, Ukraine’s deputy minister at the ministry of digital transformation and the de facto crypto spokesperson of the government. Ukraine hit $108 million a week ago, as tracked by Cointelegraph.

This is a clear testament that the crypto community is doing exactly what they have been trying to do since day one — to move capital effortlessly, seamlessly, and cheaply without any middlemen, as its users believe it is the right thing to do.

The crypto community across the globe has shown, with its massive donations, that it supports peace, stability and, to be frank, the people of Ukraine.

From an economic standpoint, the millions of dollars worth of crypto sent to the Ukrainian government could be the breakthrough. It is a clear demonstration that people stand in support of Ukrainian President Volodymyr Zelenskyy.

Crypto’s ability to remove bureaucratic red tape is one of the best ways to provide immediate service to the Ukrainian people, as they need help more than ever before. This is what Bitcoin was made for — to move the capital to where it’s needed without any hindrance.

NFTs, DAOs and Web3 communities come to the rescue

NFT platforms, DAOs and other players in the development of Web3 have shown the world what they stand for as they donate everything from crypto to NFTs to the Ukrainian government.

The people behind Bored Ape Yacht Club (BAYC) donated $1 million in ETH to the Ukrainian government. The BAYC team donated the funds to match BAYC community members, who also raised almost $1 million in donations to Ukraine.

In addition, Everstake, a Ukraine-based decentralized staking provider, sent the first tranche of financial aid to Ukraine to the tune of $1 million, which had been donated by the extended Solana community.

There are countless examples of how NFTs and DAOs are rushing behind the request of the Ukraine government, from someone transferring CryptoPunk #5364, worth over $200,000, into Ukraine’s Ethereum wallet to UkraineDAO raising over $6 million via an NFT sale to aid Ukrainian citizens.

DAOs and NFT companies have made their position clear — they are anti-war and want to see the Russian invasion end as soon as possible.

Crypto: The future of supporting causes?

During this tragic situation in Europe, we have seen that blockchain allows us to scale our efforts in a way that simply wasn’t possible before. The old ways of raising money were slow, expensive and, a lot of the time, riddled with fraud and corruption.

The borderless form of money has transformed the way people contribute money to causes that they want to support. With Bitcoin and other crypto, donors can be 100% certain that the causes and campaigns will receive the funds.

They simply need the wallet’s address and send the crypto to that address. They can go to the blockchain, such as Etherscan, and see their donation — providing peace of mind to all donors that their capital has made to the recipient.

Bitcoin and other cryptocurrencies have demonstrated that they are the cheapest, fastest, most secure way to make financial transactions across the world.

The Ukrainian government can safely store crypto without having to worry about an invading force stealing it from them or their financial system collapsing because of the war. Let’s be clear: For Ukraine, digital coins have lived up to their reputation for easily moving money across international borders.