(Source: cointelegraph.com) Billionaire Bill Ackman has called upon the city authorities to ensu...

(Source: cointelegraph.com) Billionaire Bill Ackman has called upon the city authorities to ensure that more innovators don’t migrate because of the regulatory hurdles.

A New Yorker shared his aghast on Twitter about the flawed crypto policies of the city and how it could force him to leave it.

The user lashed out at the Bitlicense policy of the city and claimed he could not open an account with any major United States exchange for his venture capital firm because of it.

Bitlicense was introduced in 2015 that governed various aspects related to crypto issuance and exchange. Any virtual currency business operating in the state of New York or managing such investments from residents of New York must obtain the license before starting operations.

However, major crypto platforms are concerned as strict licensing requirements caused some to move out.

He stressed removing regulatory barriers and easing regulations could be key to making the city a crypto hub. He said: 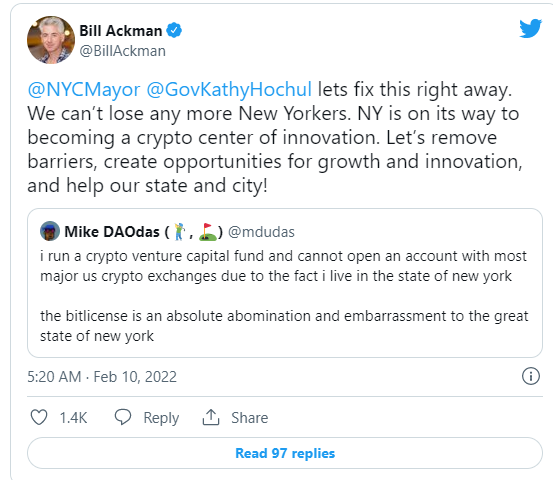 Eric Adams, the newly elected Mayor who ran the elections with crypto as the main agenda, has also come under fire recently for advocating against Bitcoin (BTC) mining in the state.

During a local government budget hearing with elected officials in Albany, Adams said he supports cryptocurrency but not crypto mining.

While many politicians over the past couple of years have shown great interest in the crypto industry and many politicians running for an election have made crypto a central agenda of their campaign.

However, a majority of them seem to be using crypto just as a campaign tool.